In 1834, aided by her first husband because women could not sue on their own, Gaines filed suit in federal and in state court in Louisiana, beginning a legal process that ended 57 years later. She first relied on her status as an heir under Louisiana’s forced heirship laws, arguing that her parents’ secret marriage was valid—or she would lose her claim as a child born out of wedlock. Later, after that strategy failed, she argued the existence of the lost, and presumably destroyed, 1813 will. Her case is still today the longest-running civil litigation in history. Her first husband, William Whitney, passed in 1837, just three years after the beginning of what would be decades-long litigation. She married a famous war hero, General Edmund Gaines, in 1839, who devoted much of his wealth towards helping Gaines pursue her case. Gaines' first victory, after several defeats, occurred in 1843.  Her most important victory came in 1858 when the Louisiana Supreme Court allowed the destroyed 1813 will to be admitted to probate.

As Gaines’ case wound its torturous way through the court systems, it also played out publicly nationwide through newspapers and tabloids. Her attorneys crafted an image of her as a vulnerable young woman, exploited by villainous businessmen. However, this publicity also thrust Gaines into a celebrity status, allowing her a platform to express her political views on suffrage and other issues. She once even forcefully and passionately argued her case before the court, at a time when many judges refused to even admit testimony from women.

From the New Orleans Daily Picayune (now Times-Picayune) on January 17, 1877: “Mrs. Myra Clark Gaines [is] a lady of rare intellectual power and remarkable force of character. During all the tedious history of the case the unconquerable spirit and indefatigable energy of this lady have been among the most striking features.” 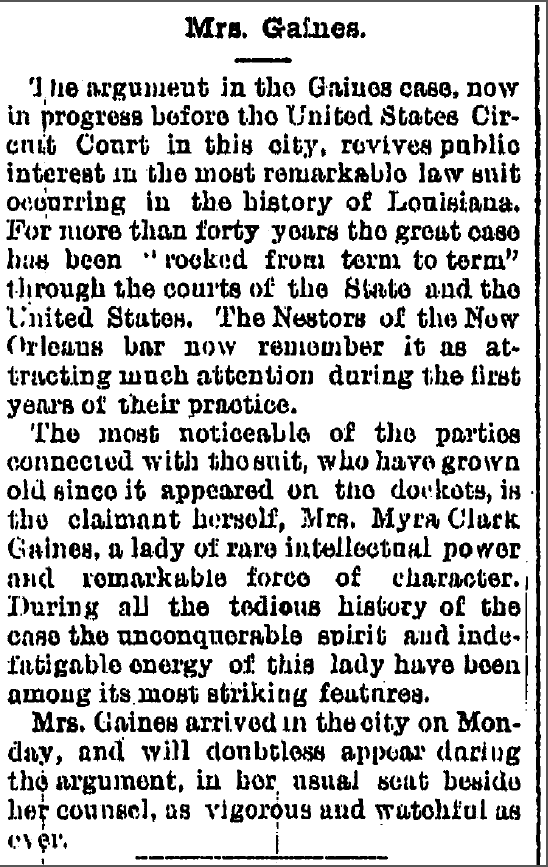