History of the Codes of Louisiana: Civil Code 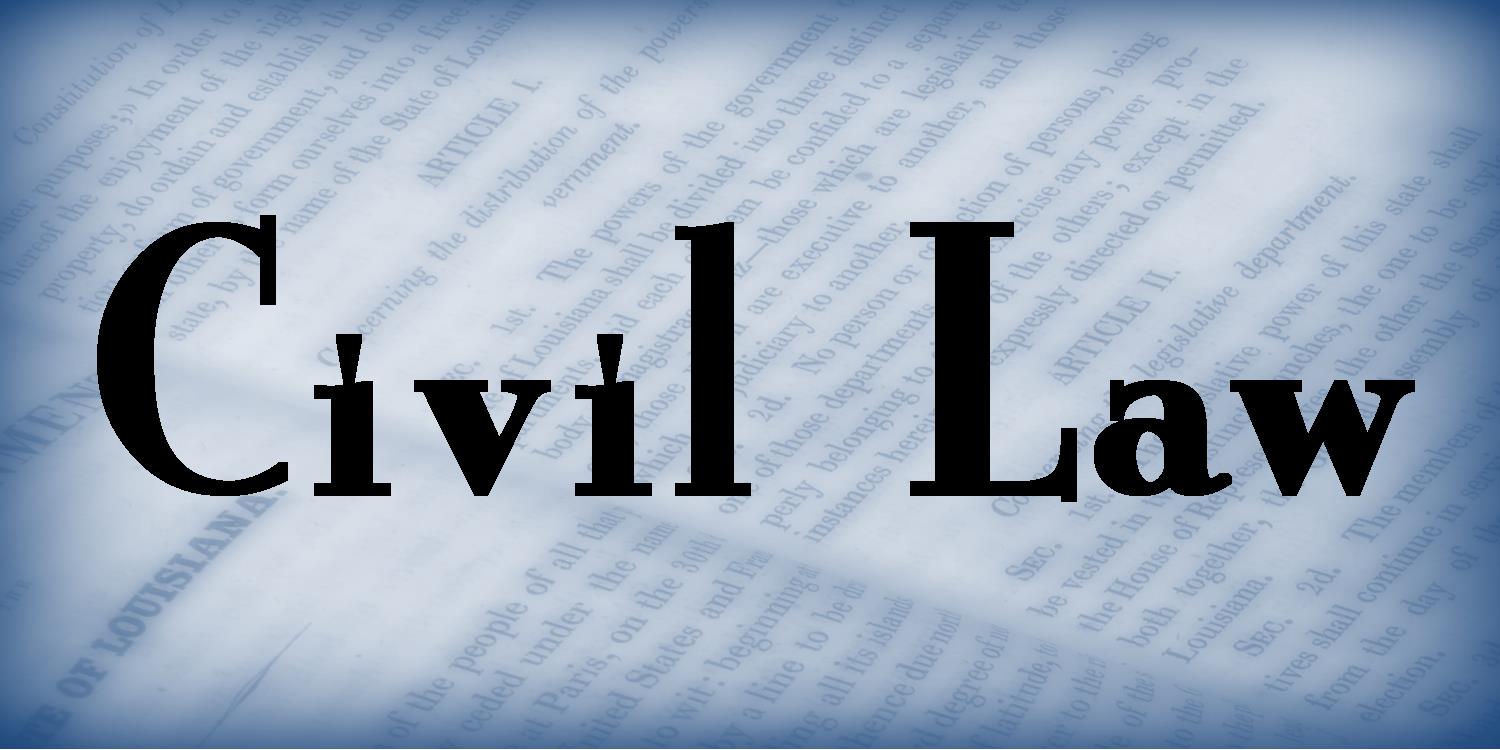 The origins of Louisiana’s unique civil law system were contentious from the beginning. In May 1806, the Louisiana Legislature adopted a bill by which the pre-existing Spanish and Roman laws would govern the territory, but Governor William C.C. Claiborne vetoed the bill. In response, the New Orleans newspaper Le Telegraphe published a manifesto signed by ten members of the territorial legislature, in which the members protested Claiborne's veto, proposed the dissolution of the legislature, and explained the reasons why they preferred the continental European system.

Image provided courtesy of the National Archives and Records Administration. 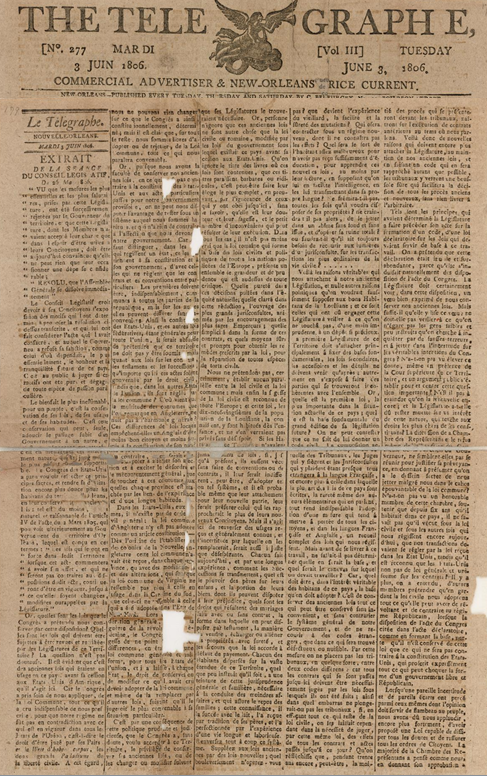 Governor Claiborne was the first American governor of Louisiana. Appointed by President Thomas Jefferson as the first territorial governor in 1804, he had no real knowledge of the people of Louisiana  when he first arrived. A relationship of mistrust developed quickly between him and the overwhelmingly French legislature. Though their relationship improved over the years, Claiborne, a lawyer trained in the common law, never ceased in his desire to turn Louisiana into a state with law similar to the rest of the country.  In this letter to President James Madison, he responds to the manifesto and explains why he vetoed the legislature’s act that would have approved the continuation of Spanish law in the new American territory.

Images provided courtesy of the National Archives and Records Administration. 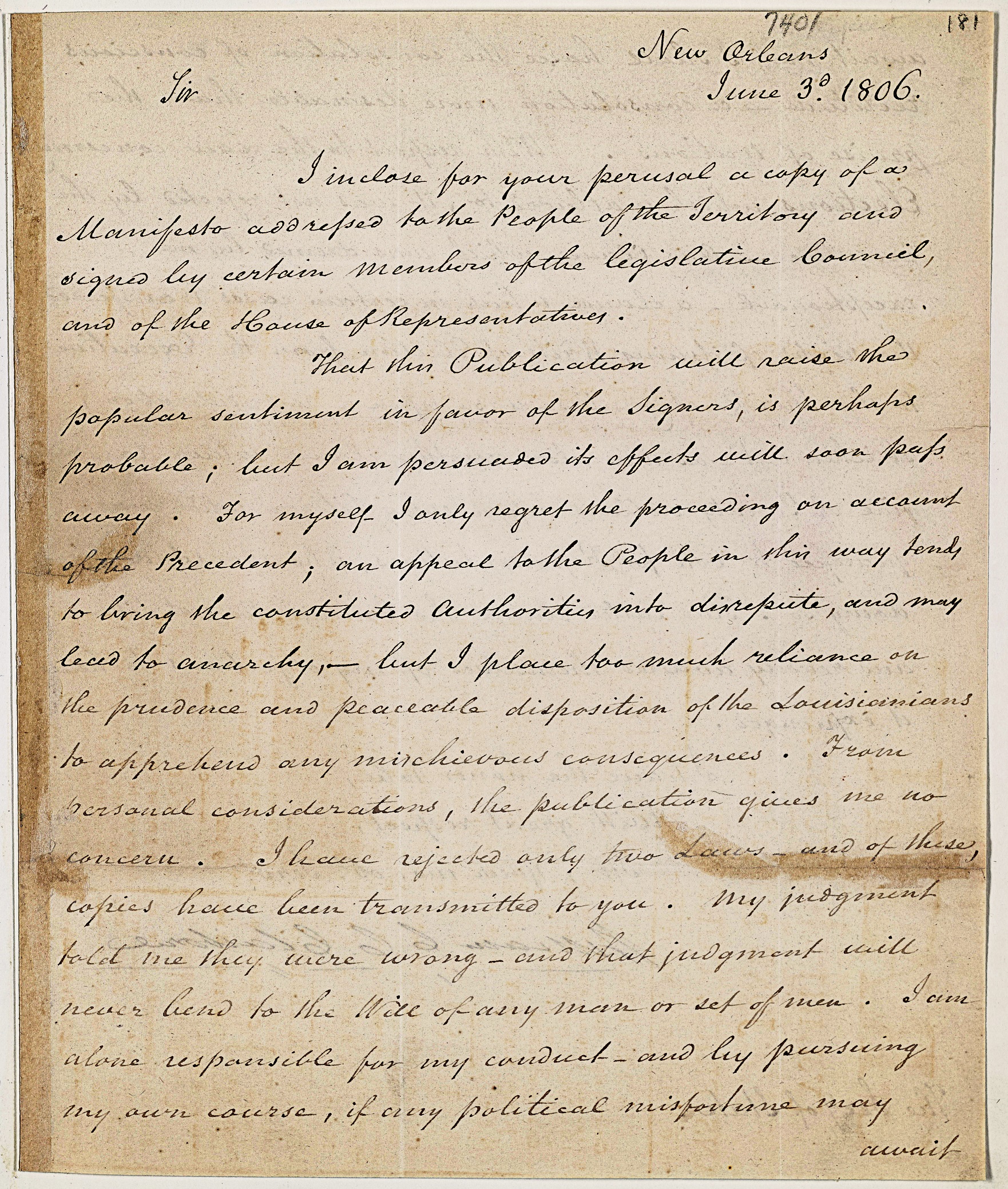 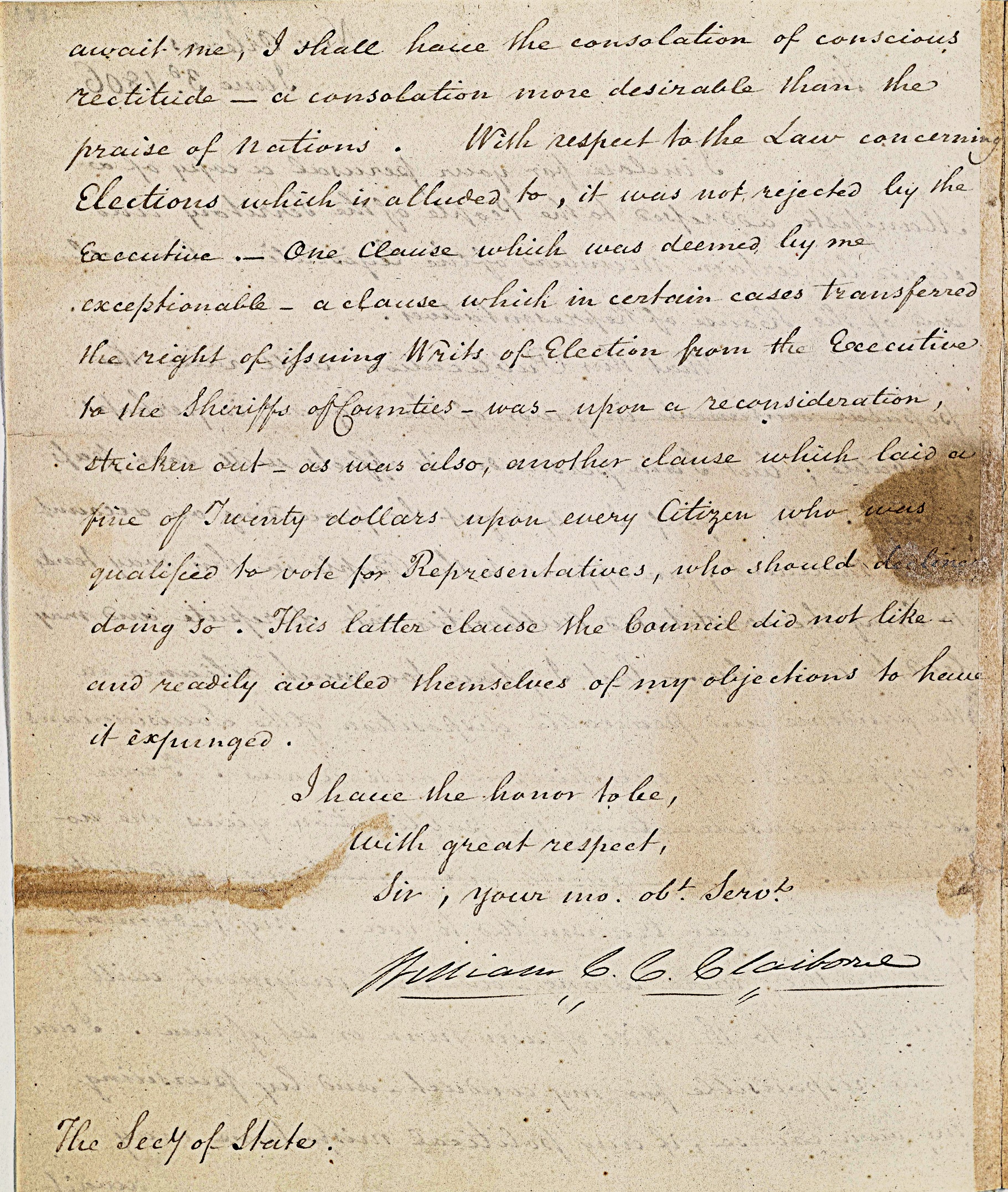 In June 1806, James Brown and Louis Moreau-Lislet were appointed by the territorial legislature to draft a civil code. Two years later, their proposed civil code was presented by the committee to the legislature for debate. In 1808, the legislature promulgated the Digest of the Civil Laws Now in Force in the Territory of Orleans, colloquially called the Digest of 1808. This time, Claiborne did not veto the initiative. The Digest of 1808 comprised 2,160 articles and was divided into a Preliminary Title, Of the General Definitions of Rights and the Promulgation of the Laws, and three books: Book I Of Persons, Book II Of Things or Estates, and Book III Of the Different Manners of Acquiring the Property of Things. The Digest of 1808 was drafted in French first and then translated into English.

The Digest of 1808 did not include an exposé des motifs explaining its sources. Nevertheless, there are copies in existence containing interleaves with handwritten notes of sources, attributed to Moreau-Lislet. One of these copies, called the De La Vergne Volume after the family who owns it, includes detailed references to the Roman and Spanish law sources at the foundation of the Digest’s titles and articles. Some references are to French texts of Roman grounding, such as the works of Pothier and Domat. A complete version of the De La Vergne Volume is provided free of charge by the Center for Civil Law Studies at LSU. 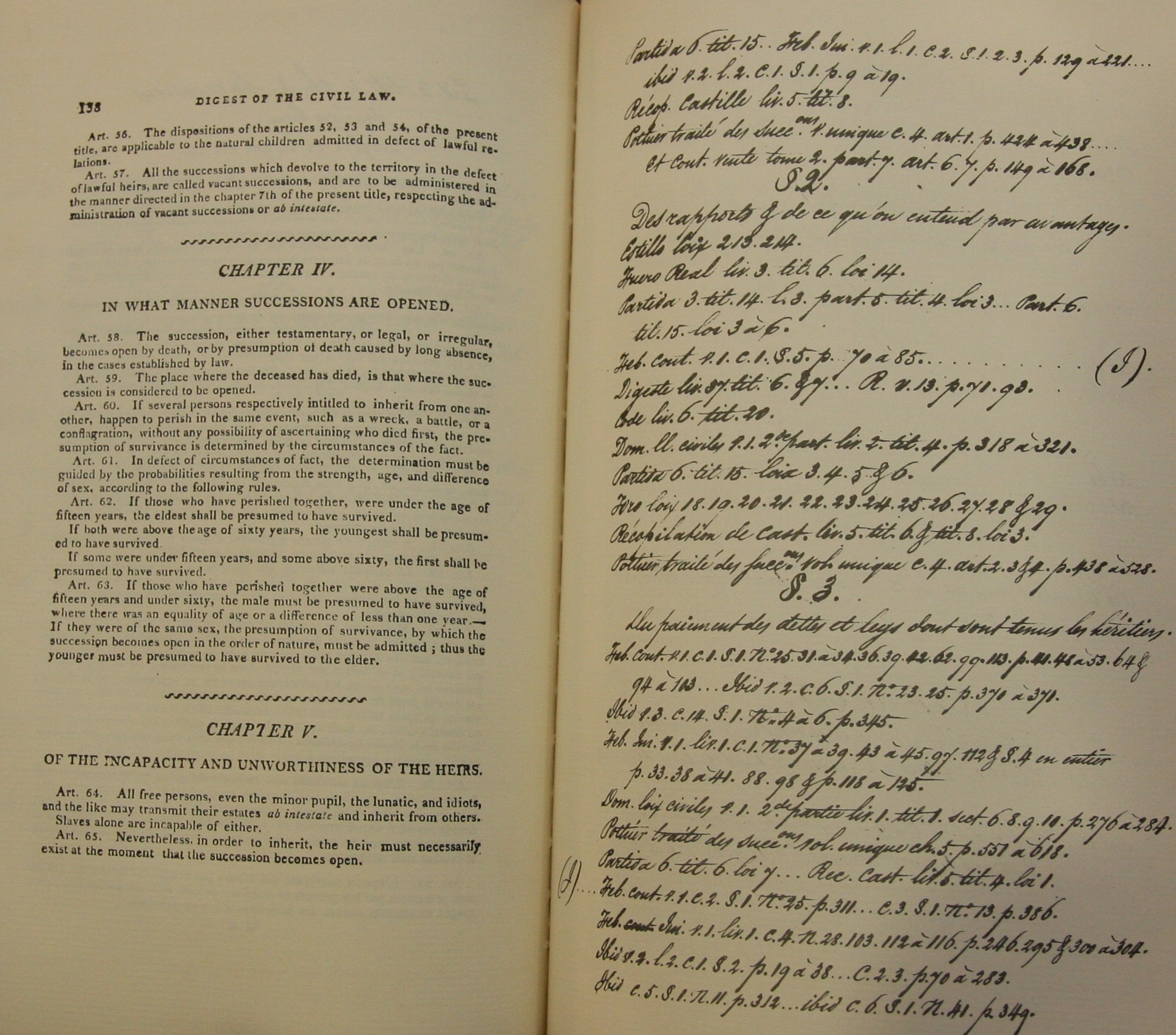 The Digest of 1808 did not completely repeal the civil laws in existence prior to its enactment. As such, uncertainty lingered about the preservation of the Spanish, French, and Roman laws. In 1817, Supreme Court Judge Pierre Derbigny opined in Cottin v. Cottin that the laws not contrary to the Digest of 1808 were still in force. This confusion motivated the legislature to act. In 1822, it appointed Derbigny, Edward Livingston, and Moreau-Lislet to make the necessary changes. The following year, they presented their Preliminary Report to the legislature. In it, the drafters stated:

We shall keep a reverent eye on those principles, which have received the sanction of time, and on the labors of the great Legislators, who have preceded us. The Laws of the Partidas, and other Statutes of Spain, the existing digest [of 1808] of our own Laws, the abundant stores of the English Jurisprudence, the comprehensive Codes of France, are so many rich mines from which we can draw treasures of Legislation. 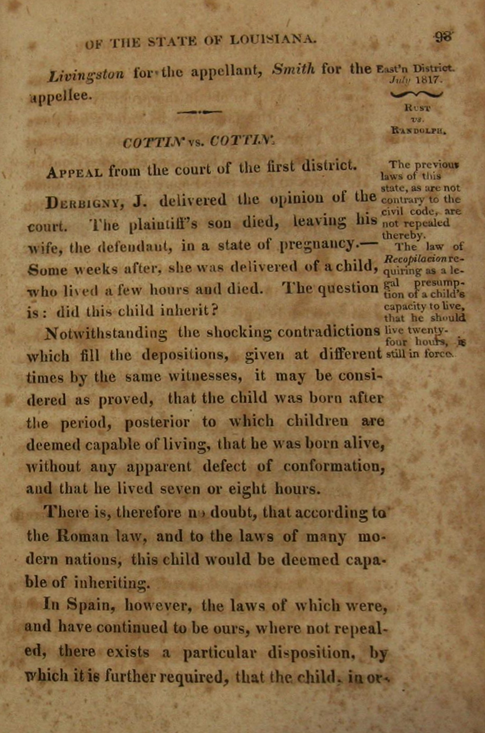 In 1824, the legislature ordered the printing of the civil code. The new text had 3,522 articles, and was entitled Civil Code of the State of Louisiana. The structure of the Civil Code was similar to the one of the Digest of 1808, having a Preliminary Title Of the General Definitions of Rights and the Promulgation of the Laws, and three books: Book I Of Persons, Book II Of Things and of the Different Modifications of Property, and Book III Of the Different Modes of Acquiring the Property of Things. With the code’s enactment, Louisiana established itself definitively as the first and only state in the nation with a civilian legal system. 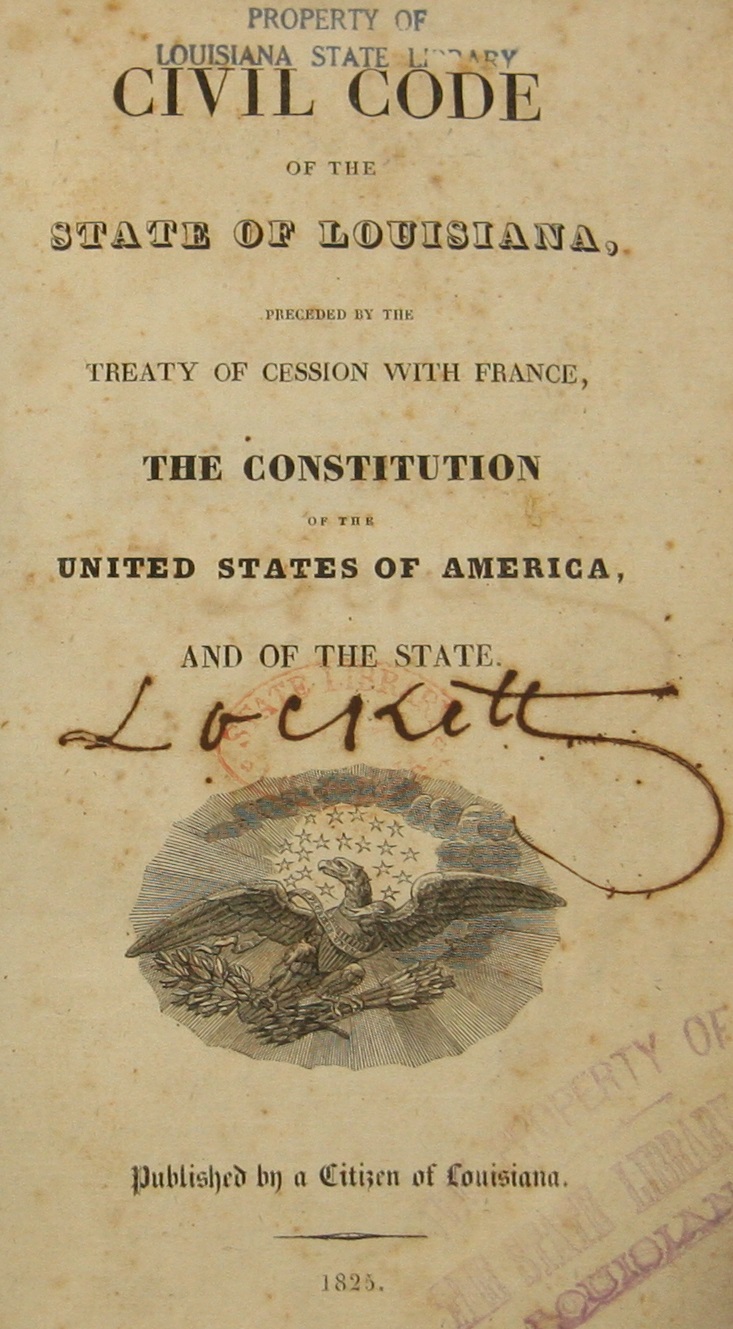