History of the Codes of Louisiana: Criminal Code

Reforms to Louisiana’s criminal law and procedure were attempted before the state was even one year old. Judge James Workman drafted An Act for the Punishment of Crimes and Misdemeanors, commonly called the Punishment Act, in 1804. Workman had opposed the corruption of the Spanish justice system. He advocated that the new state use the system passed by the U.S. Congress, a system with which Louisiana’s newest residents were more familiar. The act was short and simple. It enumerated crimes rather than defined them and specified that the general principle was to regulate crime according to the common law of England.

The Punishment Act immediately generated reactions in the legal community of Louisiana. Governor William C.C. Claiborne asked Lewis Kerr to write an elaboration on the act. Kerr presented his Exposition in 1806. He stated that his work "shall proceed, first, to an exposition of the several offences recited by the statute [ie., Punishment Act]; secondly to a sufficient detail of criminal proceedings, and the principal rules of evidence; and shall conclude with some forms of records and other process, adapted to the existing laws of the territory in criminal cases." The work of Kerr was seen as a handy tool for instruction on criminal justice practice before the courts of Louisiana. 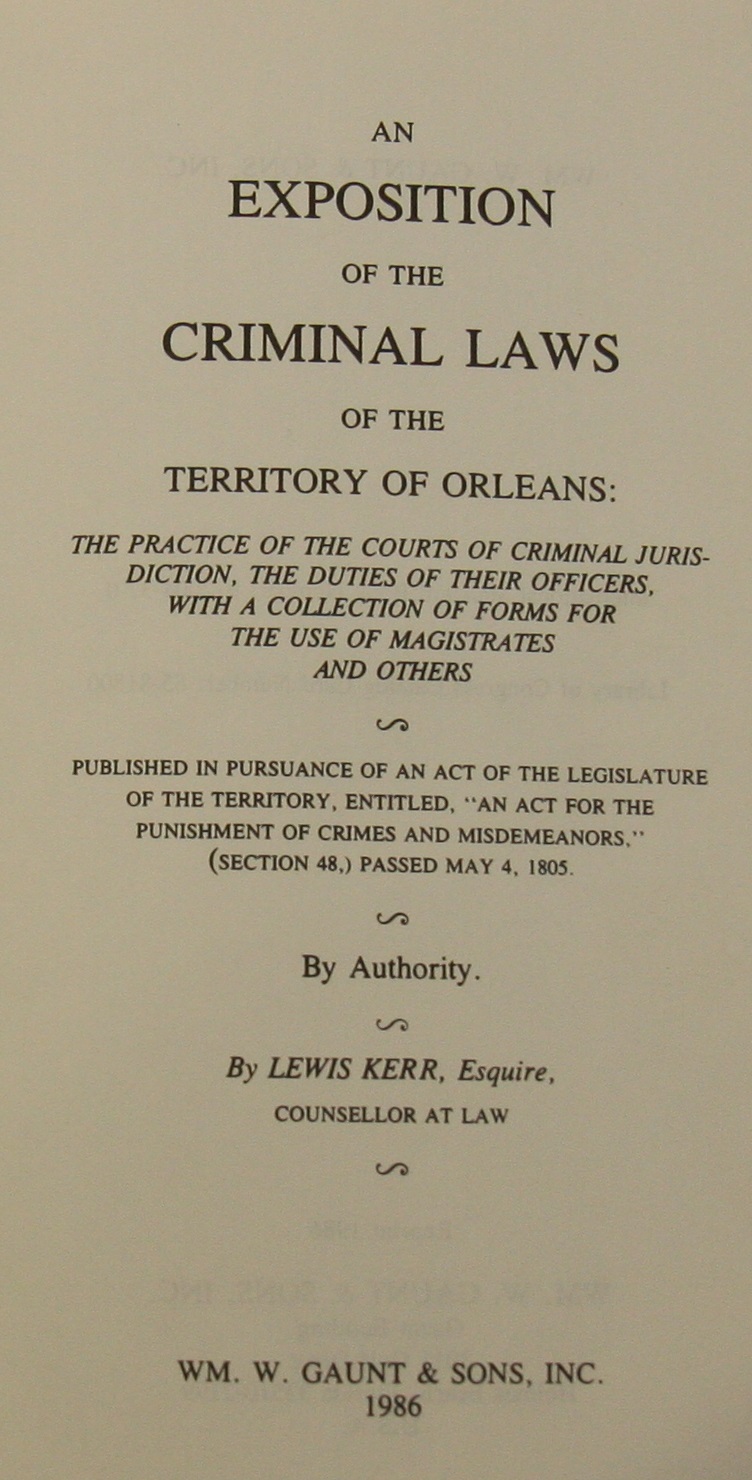 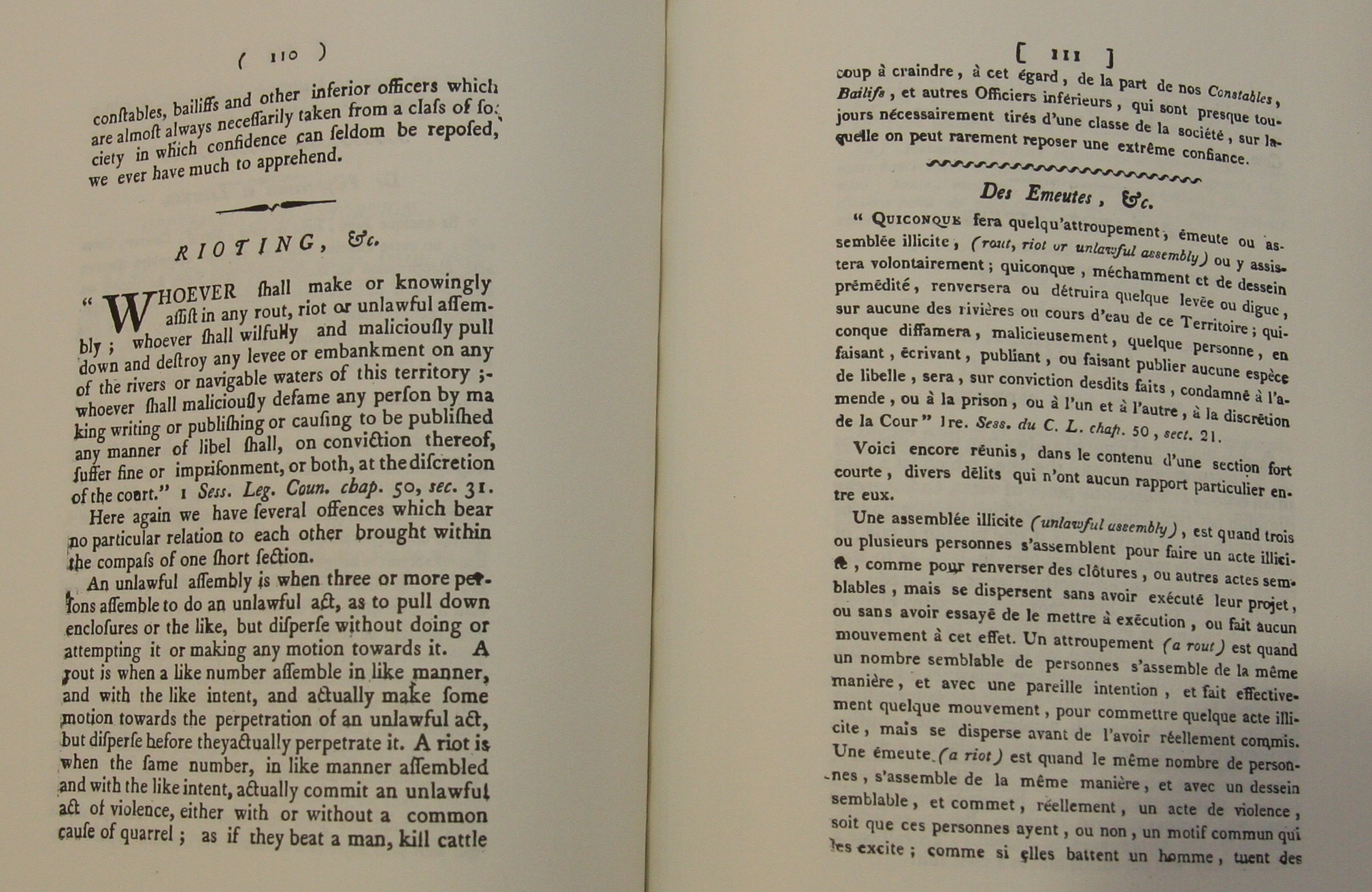 The pillory was a common form of punishment in early Louisiana. An offender’s head and hands would be placed in the pillory, and he would be forced to bend over in an uncomfortable position for many hours. But the main purpose of the pillory was not physical punishment. Rather, it was a form of public humiliation. People would gather to taunt the offender. They might also pelt the offender with rotten food and excrement. Though not widely used in early Louisiana, the pillory as a form of criminal punishment was not actually outlawed in the state until 1827, and only at that time for white persons. The U.S. Congress abolished it for all people in 1839. The pillory pictured above is on display at the LSU Rural Life Museum. 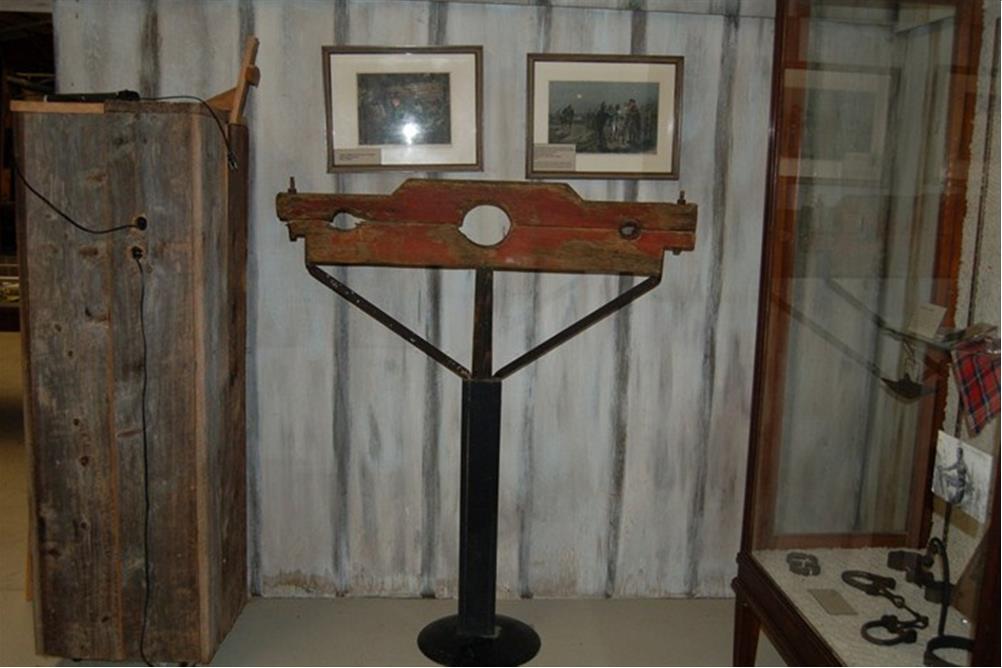 Endeavors towards a more elaborated code of crimes were still envisioned in Louisiana. By 1814, Governor Claiborne claimed that criminal law was in a confusing state in Louisiana, since it contained elements of common law, local enactments, and derivations of Roman law principles. In 1820, the legislature declared that a criminal code was needed and that it was "of primary importance, in every well-regulated state, that the code of criminal law should be found on one principle, viz. the prevention of crime." Edward Livingston was appointed to draft the new criminal code.

Livingston devoted at least four years to the execution of his planned System of Penal Law, which comprised a book of definitions and four codes: crimes and punishments, procedure, evidence, and reform and prison discipline. According to Livingston, the first code contained "the description of all acts or omissions that are declared to be offences; with the punishments assigned to each;" the second code contained "the means provided for preventing offences that are apprehended, and for repressing those that exist; and it directs the mode of proceeding for bringing offenders to justice;" the third code contained "the whole of evidence, applicable as well to civil as to penal cases;" and the fourth code contained "a system of prison discipline, in all the stages in which imprisonment is used, either as the means of detention or punishment." For each code he included a detailed report explaining the reasons and principles he followed. 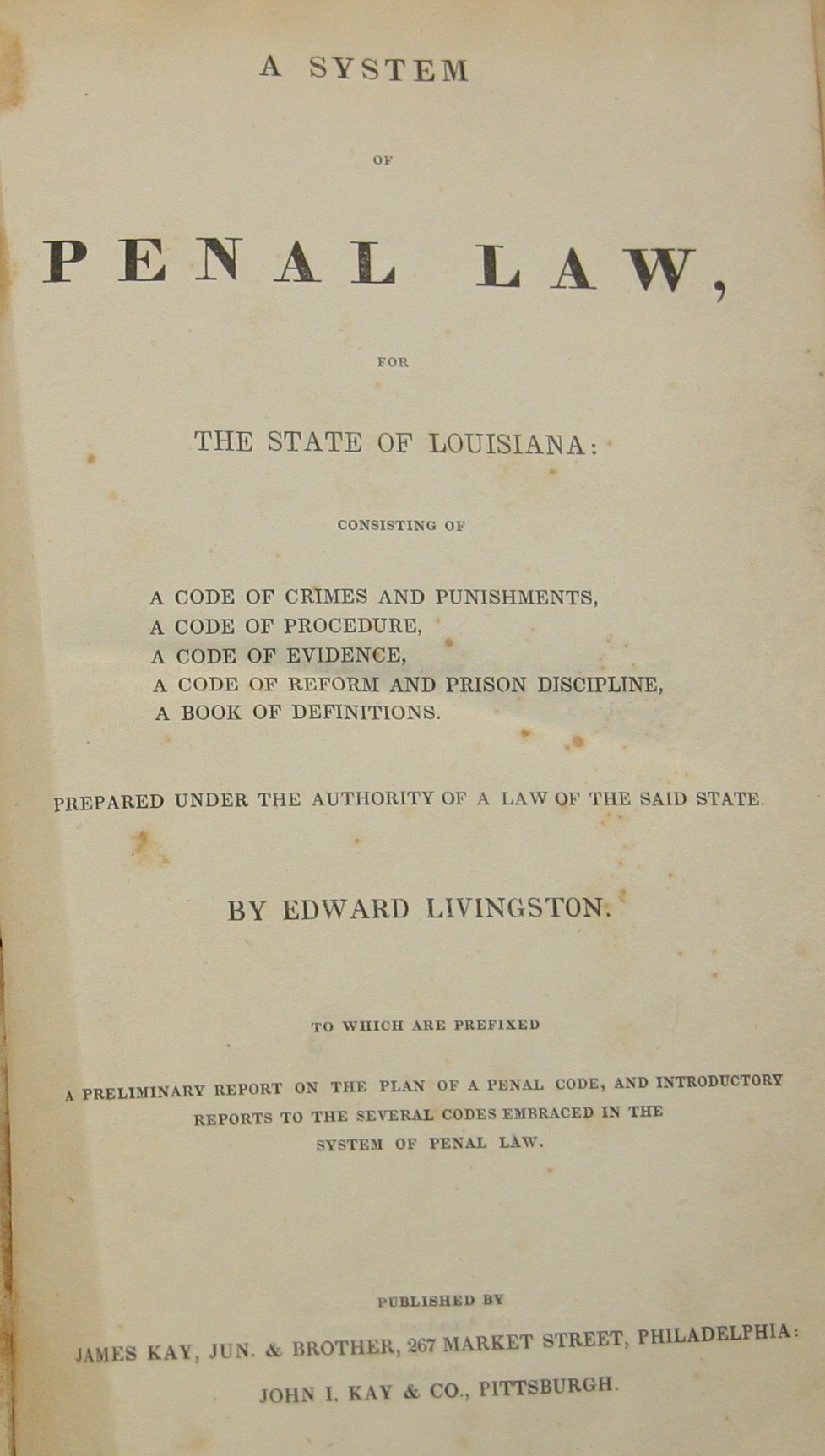 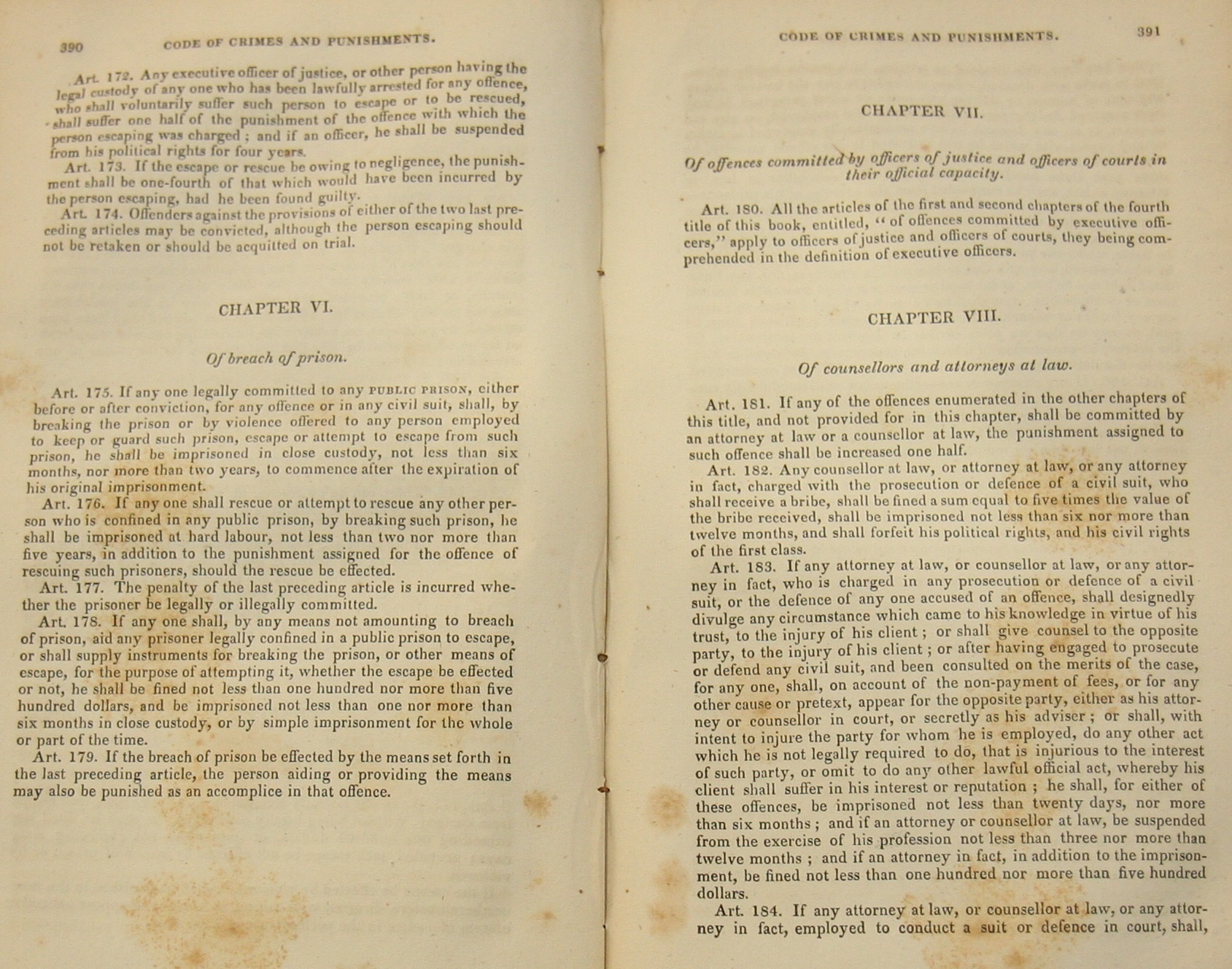 Livingston worked with a diversity of sources and found inspiration in the work of many reformers. The methodology of his work was grounded in the writings of Jeremy Bentham, who regarded the scientific aspect of legislation as being controlled by interacting general principles. Livingston mainly developed his code from books and epistles, but also on his own empirical research (for example, inquiries on criminal conditions to governors, penitentiary authorities, foreign ministers, and notable citizens from around the world). In one of his reports, Livingston said "this information could only be obtained by collecting the returns and official reports of the different establishments, and inducing men of eminence and abilities to communicate their observations on the subject." The codes and corresponding reports include references to Roman and Spanish law, although the clear majority of references are to the common law. 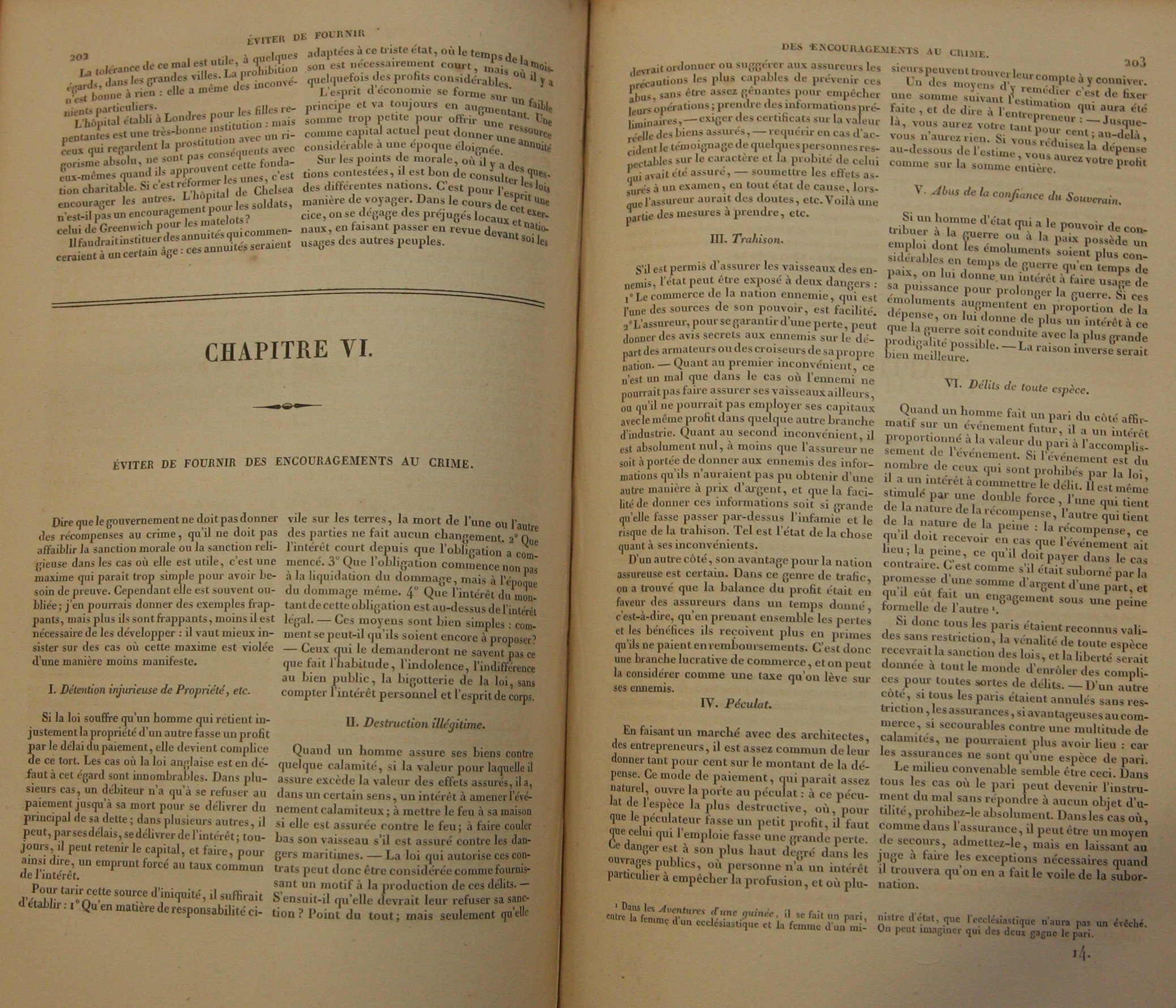 All punishments are but experiments to discover what will best prevent crimes; your favourite one of death has been fully tried. By your own account, all nations, since the first institution of society, have practised it, but you yourselves must acknowledge, without success. All we ask, then, is that you abandon an experiment which has for five or six thousand years been progressing under all the variety of forms which cruel ingenuity could invent; and which in all ages, under all governments, has been found wanting. You have been obliged reluctantly to confess that it is inefficient, and to abandon it in minor offences; what charm has it then which makes you cling to it in those of a graver cast? You have made your experiment; it was attended in its operation with an incalculable waste of human life, a deplorable degradation of human intellect; it was found often fatal to the innocent, and it very frequently permitted the guilty to escape. Nor can you complain of any unseasonable interference with your plan that may account for its failure: during the centuries that your system has been in operation, humanity and justice have never interrupted its course; you went on in the work of destruction, always seeing an increase of crime, and always supposing that increased severity was the only remedy to suppress it: the mere forfeiture of life was too mild; tortures were superadded, which nothing but the intelligence of a fiend could invent, to prolong its duration and increase its torments; yet there was no diminution of crime; and it never occurred to you, that mildness might accomplish that which could not be effected by severity.

The author of this local editorial from 1821 argued passionately for adoption of Livingston’s proposed system of penal law. Unfortunately, his dream never came true and the “barbarous” common law criminal justice system remained in Louisiana.  Though Livingston’s criminal code was never ratified by the legislature, it was widely distributed and well-regarded. His code was published in countries across Europe, and even South America and Southeast Asia. It was very influential on the development of criminal law in several countries, including Brazil and India. 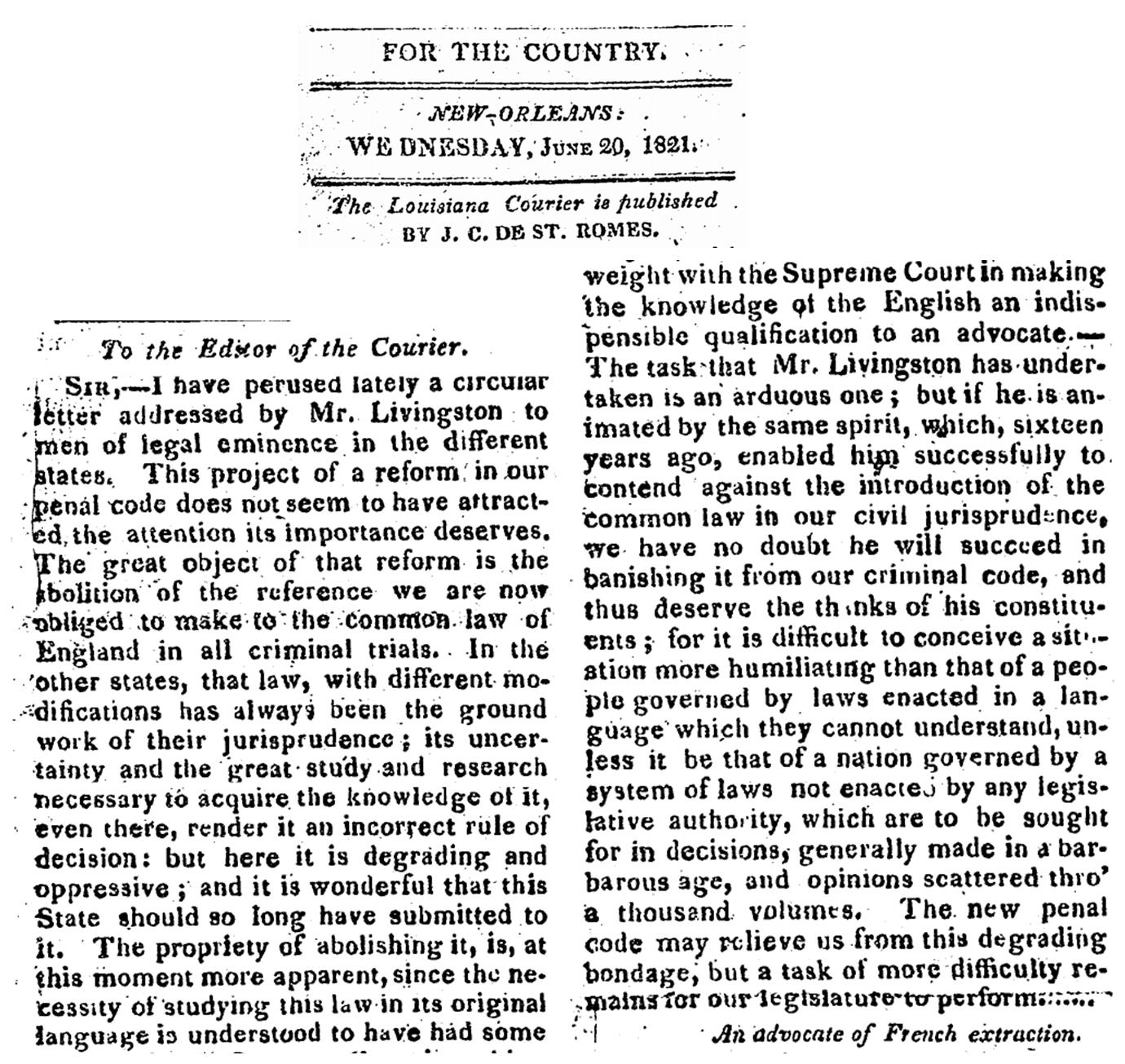 The works of Livingston on criminal law were never enacted. The adoption and reforms to the Practice Code had created some opposition to codification by 1826 in Louisiana. In addition, other governmental and political affairs were diverting attention. Hence, the drafts of Livingston were not completely welcomed. For example, in 1825 Judge Seth Lewis wrote his Strictures on Dr. Livingston’s System of Penal Laws, "vindicating the prevailing common law [and uncodified] system, and showing the evils of change." 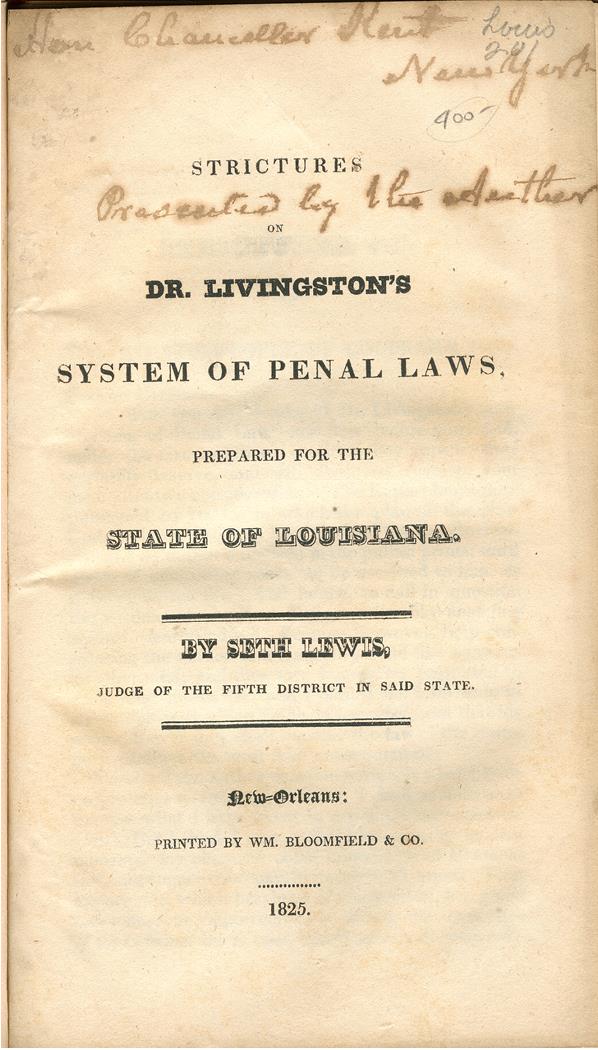 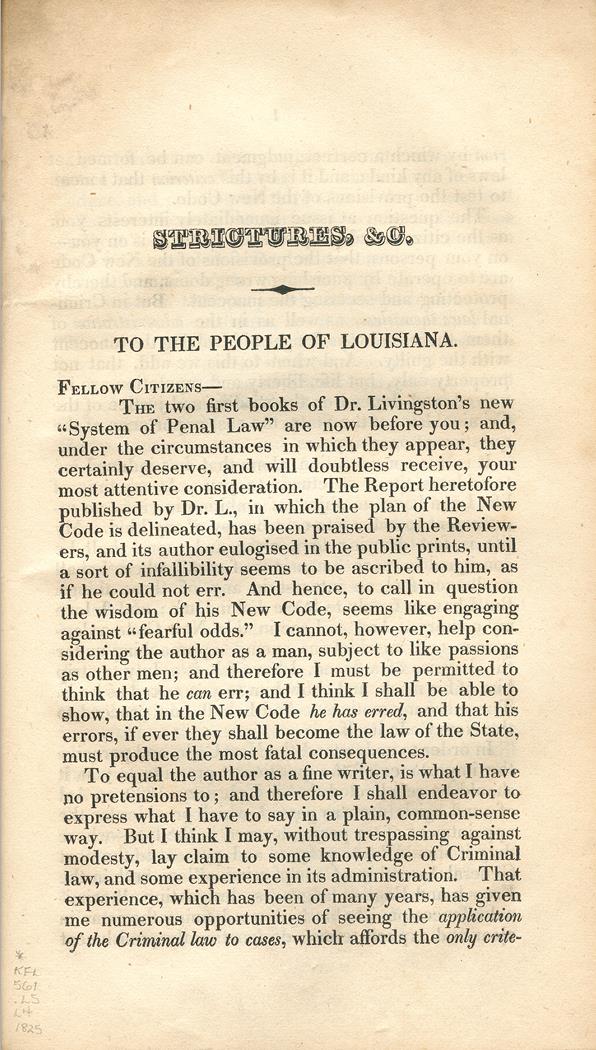