A Brief History of the Recorder's Courts of New Orleans: 1852 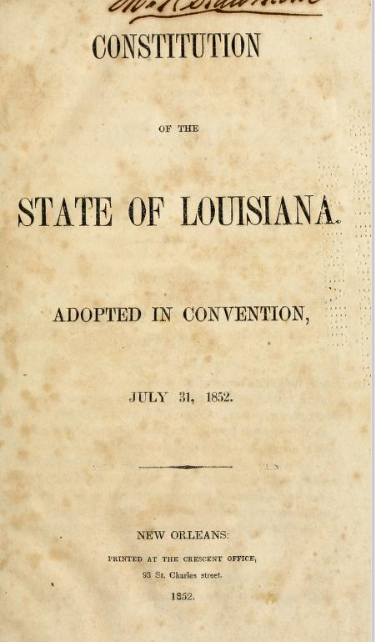 The Louisiana Constitution of 1852 had a number of articles which pertained to Recorders and Recorder's Courts.

Art. 61. The Judiciary power shall be vested in a Supreme Court, in such Inferior Courts as the Legislature may, from time to time, order and establish, and in Justices of the Peace.

Art. 71. All Judges, by virtue of their office, shall be conservators of the peace throughout the State. The style of all process shall be ''The State of Louisiana." All prosecutions shall be carried on in the name, and by authority of the State of Louisiana, and conclude against the peace and dignity of the same.
Art. 72. The Judges of all Courts within the State shall, as often as it may be possible so to do, in every definitive judgment, refer to the particular law in virtue of which such judgment may be rendered, and in all cases adduce the reasons on which their judgment is founded.
Art. 75. The Judges, both of the Supreme and Inferior Courts, shall, at stated times, receive a salary, which shall not be diminished during their continuance in office; and they are prohibited from receiving any fees of office, or other compensation than their salaries for any civil duties performed by them.

Art. 77. The Judges of the several Inferior Courts shall have power to remove the Clerks thereof, for breach of good behaviour; subject in all cases to an appeal to the Supreme Court.

Art. 81. The Judges of the several Inferior Courts shall be elected by the duly qualified voters of their respective Districts or Parishes.

Art. 84. The Legislature may determine the mode of filling vacancies in the offices of the Inferior Judges, Attorney-General, District Attorneys, and all other officers not otherwise provided for in this Constitution.

Art. 124. The citizens of the city of New Orleans shall have the right of appointing the several public officers necessary for the administration of the police of the said city, pursuant to the mode of elections which shall be prescribed by the Legislature; Provided that the Mayor and Recorders shall be ineligible to a seat in the General Assembly; and the Mayor, Recorder's, Aldermen and Assistant Aldermen shall be commissioned by the Governor as Justices of the Peace, and the Legislature may vest in them such criminal jurisdiction as may be necessary for the punishment of minor crimes and offences, and as the police and good order of said city may require.

No. 6.                    AN ACT
To repeal an Act, entitled "an Act to establish and organize, under the one hundred and twenty-eighth article of the State constitution, a mayor and recorder's court in the city of New Orleans."